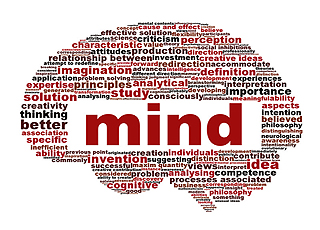 The human mind is not to be confused with the human brain.

The brain is a physical organ weighing approximately four pounds, and made up of real flesh and blood; living tissue with actual substance.

The human mind is apparently invisible, but without it we would not be able to function as human beings.

In fact, the word 'mind' refers to the aspects of intellect and consciousness manifested as combinations of thought, perception, memory, emotion, will and imagination, including all of the brain's conscious and unconscious cognitive processes. It may also include cognitive processes in non-human animals along with the conscious experiences that may accompany them. "Mind" is often used to refer especially to the thought processes of reason. Subjectively, mind manifests itself as a stream of consciousness.

There are many theories of the mind and its function. The earliest recorded works on the mind are by Zarathushtra, the Buddha, Plato, Aristotle, Adi Shankara and other ancient Greek, Indian and Islamic philosophers. Pre-scientific theories, based in theology, concentrated on the relationship between the mind and the soul, the supernatural, divine or god-given essence of the person. Modern theories, based on scientific understanding of the brain, theorise that the mind is a product of the brain and has both conscious and unconscious aspects.

The question of which human attributes make up the mind is also much debated. Some argue that only the "higher" intellectual functions constitute mind: particularly reason and memory. In this view the emotions - love, hate, fear, joy - are more "primitive" or subjective in nature and should be seen as different from the mind. Others argue that the rational and the emotional sides of the human person cannot be separated, that they are of the same nature and origin, and that they should all be considered as part of the individual mind.

In popular usage mind is frequently synonymous with thought. It is that private conversation with ourselves that we carry on "inside our heads." Thus we "make up our minds," "change our minds" or are "of two minds" about something. One of the key attributes of the mind in this sense is that it is a private sphere to which no one but the owner has access. No-one else can "know our mind." They can only interpret what we consciously or unconsciously communicate.

Consciousness is a type of mental state, a way of perceiving, particularly the perception of a relationship between self and other. It has been described as a point of view, an I, or what Thomas Nagel called the existence of "something that it is like" to be something.

Consciousness may involve thoughts, sensations, perceptions, moods, emotions, dreams, and self-awareness. It has been defined from a biological and causal perspective as the act of autonomously modulating attentional and computational effort, usually with the goal of obtaining, retaining, or maximising specific parameters, such as food, a safe environment, family, or mates.

The issue of what consciousness is, and to what extent and in what sense it exists, is the subject of much research in philosophy of mind, psychology, neuroscience, cognitive science, and artificial intelligence. Issues of practical concern include how the presence of consciousness can be assessed in severely ill individuals; how non-human consciousness can be measured; at what point in fetal development consciousness begins; and whether computers can achieve conscious states.

In common parlance, consciousness sometimes also denotes being awake and responsive to the environment, in contrast to being asleep or in a coma.

The term subconscious is defined as existing or operating in the mind beneath or beyond conscious awareness. The word subconscious was coined by the psychologist Pierre Janet, who credited it with a hidden level of awareness and automatism. In the strict psychological sense, the adjective is defined as "operating or existing outside of consciousness". The term also appears in Sigmund Freud's very early work, to denote the unconscious mind but was soon eliminated due to its ambiguity. It may also be used to describe the preconscious, information contained in the mind, which although not presently in the conscious, may be recalled by "directing attention to them", such as memories not being recalled at present, but still available to be recalled at will. Use of the term subconscious is avoided within academic psychology but remains popular in common use and other academic disciplines.