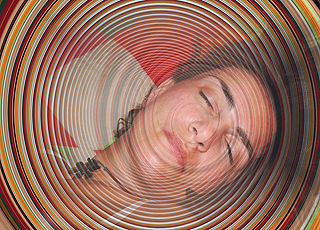 Past life regression is a technique that uses hypnosis to recover what practitioners believe are memories of past lives or incarnations, though others regard them as fantasies or delusions or a type of confabulation. Past life regression is typically undertaken either in pursuit of a spiritual experience, or in a psychotherapeutic setting. Most advocates loosely adhere to beliefs about reincarnation, though religious traditions that incorporate reincarnation generally do not include the idea of repressed memories of past lives.

The technique used during past life regression involves the subject answering a series of questions while hypnotized to reveal identity and events of alleged past lives, a method similar to that used in recovered memory therapy and one that similarly misrepresents memory as a faithful recording of previous events rather than a constructed set of recollections. The use of hypnosis and suggestive questions makes the subject particularly likely to hold distorted or false memories. The source of the memories is more likely cryptomnesia and confabulations that combine experiences, knowledge, imagination and suggestion or guidance from the hypnotist than recall of a previous existence. Once created, the memories are indistinguishable from memories based on events that occurred during the subject's life. Memories reported during past life regression have been investigated, and revealed historical inaccuracies that are easily explained through a basic knowledge of history, elements of popular culture or books that discuss historical events. Experiments with subjects undergoing past life regression indicate that a belief in reincarnation and suggestions by the hypnotist are the two most important factors regarding the contents of memories reported.

In ancient Indian literature, the Upanishads mention past-life regression, but the Yoga Sutras of Patañjali discuss the concept in greater detail. Writing during the 2nd century BC, the Hindu scholar Patañjali discussed the idea of the soul becoming burdened with an accumulation of impressions as part of the karma from previous lives. Patañjali called the process of past-life regression prati-prasav (literally "reverse birthing"), and saw it as addressing current problems through memories of past lives. Some types of yoga continue to use prati-prasav as a practice.

In the religious mythology of China the deity Meng Po, also known as the "Lady of Forgetfullness", prevents souls from remembering their past lives: she gives them a bittersweet drink that erases all memories before they climb the wheel of reincarnation.

In the modern era, it was the works of Madame Blavatsky, co-founder of the Theosophical Society, which brought it a new found popularity, especially in the West. French educator Allan Kardec also researched into past life regression in The Spirits Book and Heaven and Hell. Past life regression therapy has been developed since the 1950s by psychologists, psychiatrists and mediums. The belief gained credibility because some of the advocates possess legitimate credentials, though these credentials were in areas unrelated to religion, psychotherapy or other domains dealing with past lives and mental health. Interest in the phenomenon started due to American housewife Virginia Tighe reporting and recounting the alleged memories of a 19th-century Irish woman named Bridey Murphy; later investigation failed to support the existence of such a woman and the memories were attributed to Tighe's childhood during which she spent time living next to an Irish immigrant.

In the West, past-life regression practitioners use hypnosis and suggestion to promote recall in their patients, using a series of questions designed to elicit statements and memories about the past life's history and identity. Some practitioners also use bridging techniques from a client's current-life problem to bring "past-life stories" to conscious awareness. Practitioners believe that unresolved issues from alleged past lives may be the cause of their patients' problems. The technique is not taught as part of any medical internships. Luis Cordón states that this can be problematic as it creates delusions under the guise of therapy. Memories can vary from harmless to actually increasing suffering in the patient or their families. The memories are experienced as vivid as those based on events experienced in one's life, impossible to differentiate from true memories of actual events, and accordingly any damage can be difficult to undo.

Chinese numerologists use the Buddhist/Taoist text the Three Lives Book to describe details of past lives. Teachers of Eastern religion claim to be able to use siddhi or abhijna abilities to regress past lives (pubbeniva-sa-nussati.

Scientific consensus is that the memories are the result of cryptomnesia, narratives created by the subconscious mind using imagination, forgotten information and suggestions from the therapist. Memories created under hypnosis are indistinguishable from actual memories and can be more vivid than factual memories.

Examinations of three cases of apparent past life regression (Bridey Murphy, Jane Evans and an unnamed English woman) revealed memories that were superficially convincing. However, investigation by experts in the languages used and historical periods described revealed flaws in all three patients' recall. The evidence included speech patterns that were "...used by movie makers and writers to convey the flavour of 16th century English speech" rather than actual Renaissance English, a date that was inaccurate but was the same as a recognized printing error in historical pamphlets, and a subject that reported historically accurate information from the Roman era that was identical to information found in a 1947 novel set in the same time as the individual's memories, with the same name reported by the person regressed. Other details cited are common knowledge and not evidence of the factual nature of the memories; subjects asked to provide historical information that would allow checking provided only vague responses that did not allow for verification, and sometimes were unable to provide critical details that would have been common knowledge (e.g. a subject who described the life of a Japanese fighter pilot during World War II but was unable to identify Hirohito as the Emperor of Japan during the 1940s).

A 1976 study found that 40% of hypnotizable subjects described new identities and used different names when given a suggestion to regress past their birth. In the 1990s a series of experiments undertaken by Nicholas Spanos examined the nature of past life memories. Descriptions of alleged past lives were found to be extremely elaborate, with vivid, detailed descriptions. Subjects who reported memories of past lives exhibited high hypnotizability, and patients demonstrated that the expectations conveyed by the experimenter were most important in determining the characteristics of the reported memories. The degree to which the memories were considered credible by the experimental subjects was correlated most significantly to the subjects' beliefs about reincarnation and their expectation to remember a past life rather than hypnotizability. Spanos' research leads him to the conclusion that past lives are not memories, but actually social constructions based on patients acting "as if" they were someone else, but with significant flaws that would not be expected of actual memories. To create these memories, Spanos' subjects drew upon the expectations established by authority figures and information outside of the experiment such as television, novels, life experiences and their own desires.